Hellboy isn’t going to reinvent the wheel. It isn’t going to win Oscars, or make billions of dollars spending weeks atop the box office. It isn’t the 3rd outing we hoped Guillermo Del Toro would get. And it isn’t perfect. But,to be fair, it never wanted to be any of those things, and it is still very entertaining.

Hellboy, directed by Neil Marshall(The Descent, Dog Soldiers) is a reboot of the supernatural anti hero. Sourcing pieces of The Wild Hunt, Darkness Calls, The Storm and The Fury, and Hellboy In Mexico storylines, the film obviously bites off a bit more than it can chew. But god damnit, it tries. We open with Hellboy in Mexico trying to track down a BPRD (Bureau of Paranormal Research and Development) agent that went missing. He finds him moonlighting as a luchador, and also he is a vampire. After a quick fight, he accidentally impales him over the turnbuckle.

What happens over the next two hours is much of the same. Hellboy encounters a monster, Hellboy reluctantly fights the monster, and he eventually gores the monster until it dies in spectacular fashion. By taking the greatest hits from those 4 series, it allows Marshall to squeeze in as many monsters and as much bloodshed as possible, not caring too much about the plot, but more about the ride. 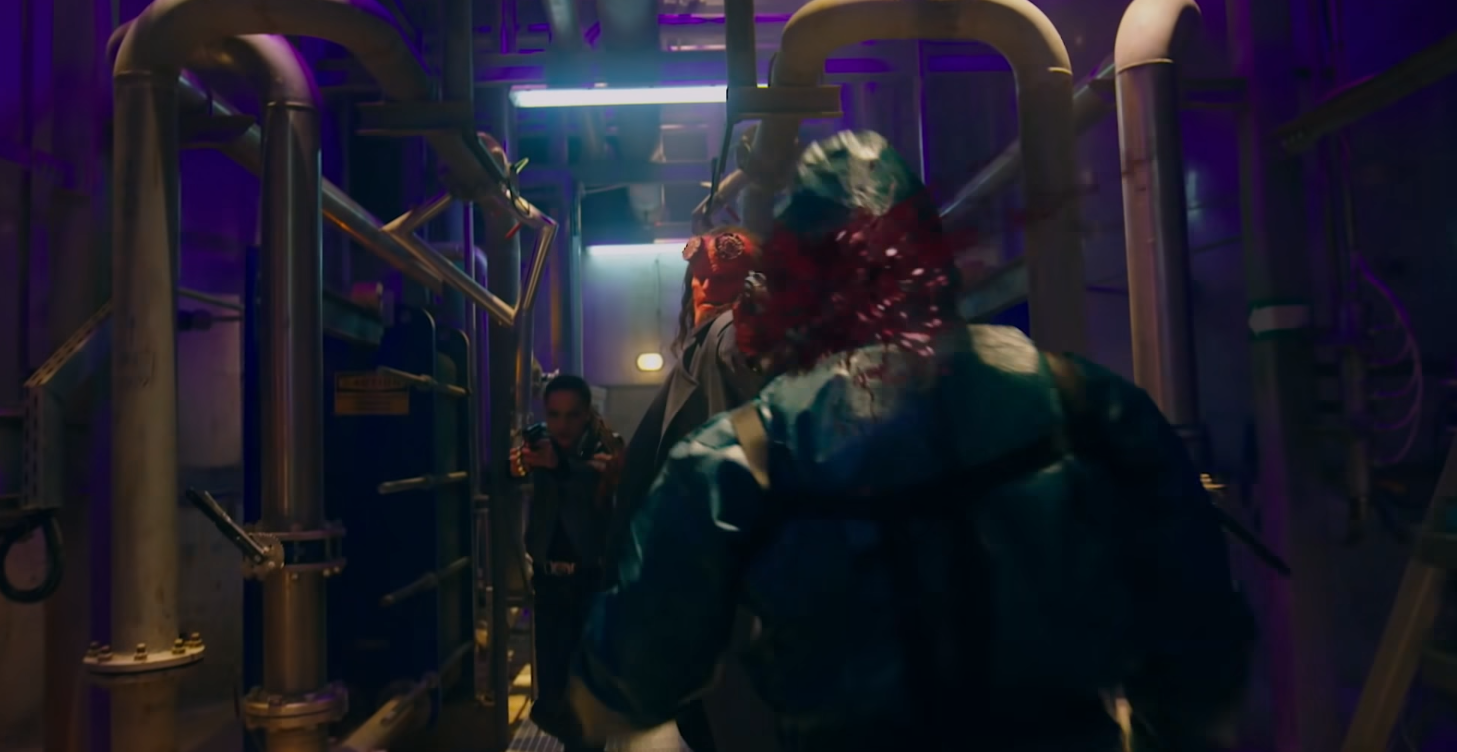 It doesn’t have the charm of Perlman’s iteration, but David Harbour actually kicks ass. He plays a Hellboy that is uncomfortable being who he is. He wants normalcy and he wants to not have to hide in the shadows. He is sick of being the monster. In the same vein, Ian McShane’s Professor Broom is a much different father to Hellboy. He is one of tough love, harsh and biting with his criticism, pushing Hellboy to be who he expects him to be. Both Harbour and McShane give these roles their all and it is great to watch.

Other shining examples in this film are Milla Jovovich as the Blood Queen, Nimue, Daniel Dae Kim as Ben Diamo, and Troy James and Emma Tate as Baba Yaga. Tate provides the voice acting for the Slavic folk monster, while Troy James provides the contortionist physical acting that made it so unnerving. Jovovich is no stranger to supernatural roles, or action horror movies that seek to be visually fun, and her role in Hellboy is no exception. She plays the evil resurrected Queen wanting to bring monsters into the sunlight, and knows how to push buttons with Hellboy’s emotions. Daniel Dae Kim plays Ben Diamo, an M11/ BPRD agent with reservations about monsters and a shady past. He sells the hate and no nonsense attitude his character throws out.

What Marshall does right here is the atmosphere. He crafts some cool set pieces, specifically, Baba Yaga’s house on chicken legs, Pendle Hill, St Paul’s Cathedral, and Merlin’s tomb. The makeup is really great as well. The special effects are mostly CGI, and most of them play well as just violent and fun. There is one specifically at the end that really took me out of the moment, but for the most part it’s great. The Gruagach, a hog-like fairy that has a vendetta against Hellboy is specifically a total CGI character, that really works well. Imagine Bebop from TMNT, minus the glasses and vest. The larger creatures in the last act look heavily inspired by Del Toro’s style of creatures, and I really enjoyed that.

All in all, yes this movie is messy. It’s pacing is off, it is crowded, and it doesn’t really spend enough time on any one plot element to make it stick out. But god damn is it fun. It reminds me of watching Doom(2005), or Punisher: War Zone(2008). It’s action horror that wants to be gory and messy and fun. It accomplishes all of those, and  then some.

We have been so blessed by an avalanche of superhero movies in the past 10-15 years, that we hold these films to such a high standard and expect so much out of them. But once in a while, it’s nice to turn off your brain and expectations, forget about expanded universes, and watch Hellboy impale a giant on a 40ft fir tree. It seeks to be nothing more than a good ass time, and in that respect, it succeeded. This is one I would suggest trying for yourselves and not listening to the critics. I would very much like to see what they do with a second outing.

Oh, and the soundtrack fucking rules.